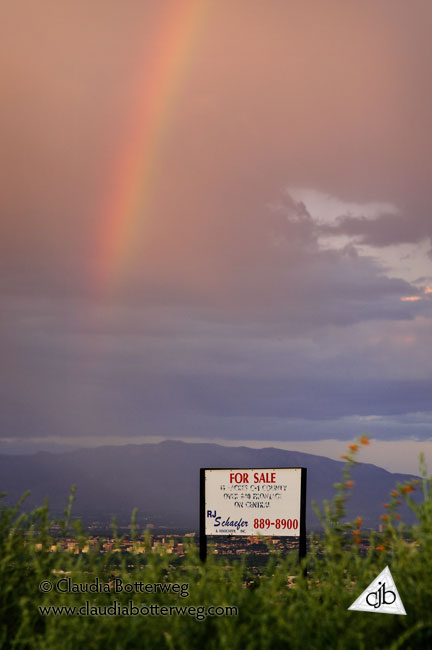 Got a good start and stopped in Flagstaff for lunch with Joel DiBartolo. We went to Pita Jungle, which was great food. On the way out of town, I got some coffee at the Campus Coffee Bean, my old hangout from the Flagstaff Music Festival and Arizona Opera’s productions of Wagner’s Ring cycle.

On route 40 in Arizona, I learned that you should not trust that rest areas will be open, especially when you need them.

Approaching Albuquerque there was a construction zone. Traffic was slow and in the east a thunder storm was forming. I pulled off and parked in a lot overlooking the city, and found this photo to make. All my camera gear was packed in the trunk and I barely had time to get a few things together before the rainbow went away. For the rest of my trip, I’ll keep the basic camera stuff in front with me.

I have Ben’s saxophone and bass guitar, cookbooks and other things he couldn’t get on the plane when he moved to Ohio. The hotel I’m staying at says it is in a high crime area so I lugged most of the stuff that’s in the car into my room, in the pouring down rain.