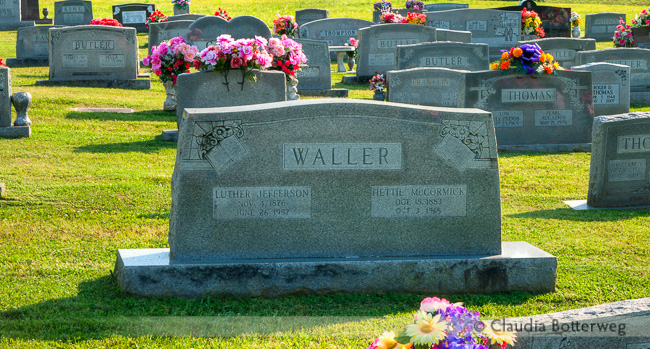 Today was a very long day, indeed! After spending the day at with Clifton and Shelby at their new house, I took off to the Waller hollow (pronounced holl-er). The drive in was just as I remembered it: curvy and forever with nothing but woods, except that the roads are paved better and there are more bridges over the creeks (pronounced branch).

I pulled up into Aunt Maude’s driveway. Now, Aunt Maude is in a nursing home, Uncle Hiram passed away several years ago, and all my cousins live in other places. The house was supposed to be empty, but there were 3 scruffy guys sitting on the front porch. Keeping my husband’s advice in mind (we watched [amazon B001EBV0LW inline] just before I left home), I walked up and said, “Hi, I’m a Waller…”. One of the guys stood up and said, “Well that’s good because I’m a Waller too!” It turned out to be my cousin Danny Joe, who was scruffy because they had been working all day on restoring the house so that visitors can come and stay whenever they want to. Beverly and Steve came by and we had a great time catching up after 30 years.

I took a pano of where my Great Grandma Hettie’s house used to be in the little valley (holler). Steve’s house is there now (Grandma’s house burned down a couple decades ago). Most everything looks the same except for trailers on lots on the hill around the bend.

On the way to Aunt Chloe’s, I stopped by Ollie’s but nobody was home. Aunt Chloe’s house burned down many years ago, and there is no trace that it ever existed. I couldn’t figure out where it might have been.

I wanted to go up to see my Mom’s cabin (sold long ago). There were 2 driveways that could have been correct, but one was fenced and locked and the other didn’t go very far. At the end of the road, I turned the wrong way and got lost on some sort of dead end road that went on and on, with lots of driveways that looked like roads and roads that looked like driveways. After an hour of driving back and forth, up and down, and around and around, and things starting to seem familiar, but starting to get a little dark, I managed to find a man in a Jeep, and later a kid on a bike, who told me how to get out of there. Whew! (Memories of Deliverance)

I never found Aunt Chloe’s church, but stopped by the Butler Cemetary where Luther and Hettie are buried. I marked it on the map below, but I doubt that is actually where it is…